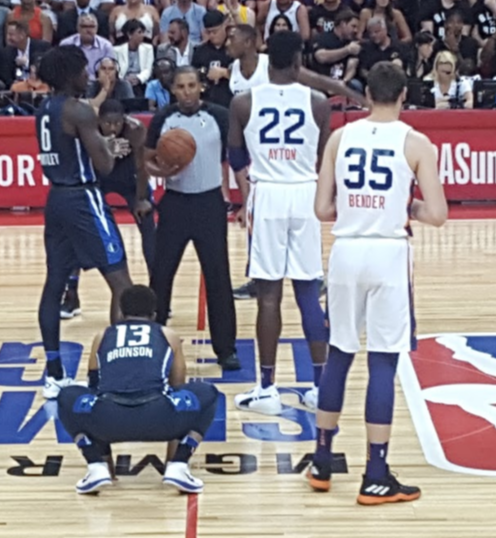 The long awaited and much anticipated arrival of my “Below the Rim” segment is finally here. Okay, okay… So most of you have probably completely forgotten about the passing comment made a few episodes back about how this segment should be a thing, but around the No Scrubs Allowed office it has been long awaited and much anticipated, so I’m going to run with it. I’m going to talk about three surprise records to me from each conference as well as break down my current Most Valuable Player (MVP) and Rookie of the Year (ROY) award race.

We’re a quarter of the way through the NBA season and anyone that has been watching the great NFL and NCAA Football seasons probably assumes that the top teams in the NBA are the Golden State Warriors, Houston Rockets, Boston Celtics, and Philadelphia 76ers. Well that’s what this post is for, because none of those teams have even cracked the top 5 teams in the league. The teams that hold that honor are the Toronto Raptors, Milwaukee Bucks, Los Angeles Clippers, Oklahoma City Thunder, and Memphis Grizzlies. Let’s discuss a few of the surprise records that have popped up in the NBA, shall we?

The least surprising team on my list is the Toronto Raptors. Many people had them as one of the top two teams in the East if Kawhi Leonard was able to return to his MVP form. The reason they are on this list for me is they have taken a lot of ifs and turned them into the NBA’s best record 20 games through the season. The Raptors spent the off-season by firing their coach of the year winning coach and trading away their All-NBA hometown hero for a former MVP Runner-up. How are their current guys doing? Well, Nick Nurse is the early front-runner to give the Raptors back-to-back Coach of the Year winners, and Kawhi Leonard seems to be back to form averaging 24.4 PPG and 8.4 RPG. If they can keep this up they should finish as the top seed in the Eastern Conference unless the next team on this list has anything to say about it.

Milwaukee is another one of the “if-then” teams on this list, and their “if-then” all revolves around Giannis Antetokounmpo continuing his progression toward taking the “best player in the league” crown. Giannis is doing just that and more. He is averaging 26.8 PPG, 12.7 RPG, and 5.6 APG and has looked even better than that on the eye-test. Giannis is an absolute physical freak that can famously score from half-court with only a single dribble

The Bucks made the absolute right move in moving from Joe Prunty to Mike Budenholzer and he has pushed all the right buttons (Mainly allowing Giannis to be the best player in the league) in order to get this Bucks team to realize its potential.

With Kyrie Irving and Gordon Hayward returning from injury, the Celtics were supposed to be far and away the best team in the Eastern Conference and the only team with the potential to take down the Warriors. The Celtics have been anything but that as Brad Stevens has yet to figure out the best way to rotate his uber talented team. Gordon Hayward is also playing like a shell of his former self as he continues to shake the rust off after missing an entire year. The Celtics currently sit at sixth in the Eastern Conference and should figure out how to start winning soon. Beating them in a seven game series will still be a tall task for any Eastern Conference team.

500 points to anyone that can name the five starters on the Clippers… I’m going to try right now before looking it up… Um, Patrick Beverley, Marcin Gortat, Avery Bradley, Tobias Harris, and Boban Marjanovic… Okay, that was hard and I live in Los Angeles, but I did get four out of the five right (I somehow missed Danilo Gallinari and named two big men but hey, I spelled Marjanovic’s name right). That little experiment shows one of two things; either I’m not a good sports reporter or Los Angeles media doesn’t care at all about the “other” LA team. The truth is that this team is good, and Doc could be having one of his best coaching seasons after everyone was calling for his head a couple of years ago. Tobias Harris is playing his best basketball as the leader of this team, and the clippers have two guys duking it out for the sixth man of the year award in Lou Williams and Montrezl Harrell. Lou Williams is a well known name who is much like Manu Ginobili in the fact that he is arguably the best player on the team but he is humble enough to know he has more impact on the team by coming off the bench. Coming off the bench means nothing for Williams as you would be hard pressed to ever find him on the bench in the fourth quarter of a close game. The team knows exactly how valuable he is. As for Harrell, he is a major energy guy that gets every 50-50 play in his area, and it appears that he has figured out how to score as well.

At full strength, the Warriors are unquestionably the best team in the NBA and the clear favorites to win their third straight NBA championship and their fourth in five years solidifying them as a dynasty. The surprising part is how much of a difference losing a single player has made on this team. Stephen Curry went down with an injury with the Warriors dominating as always, but after he has gone down we have seen dissension amongst the Warriors and losses starting to pile up. I have no doubt that the Warriors will still make the playoffs and should run through the Western Conference playoffs from whichever seed they earn, but this early messiness is still enough to put them on the surprises list.

Houston was the most recent team to try out the Carmelo Anthony Experience and I think it’s safe to say that it went poorly. Houston was TERRIBLE while Carmelo was on the team whether or not it had anything to do with him. It looks as if they’ve righted the ship going 7-3 in their last ten games and if I were a betting man I would put my money on a Houston-Golden State WCF while the odds are at their worst.

A quarter of the way through the season I have broken down the MVP and ROY awards to three finalists and my winner, and it could easily be knocked down to two candidates for each.

The reason that I have Steph third here is because the Warriors are showing how valuable he really is to them. If Steph had played every game for the Warriors he would be my winner here, but since he hasn’t played enough games to qualify officially I have him third (I think he will qualify by the end of the season so he’s still in my discussion). The real argument a quarter of the way through the season is Lebron vs Giannis.

The case for Lebron is easy. He’s the best player in the game. Without him, the Lakers would be battling with the bottom dwellers for the #1 overall pick in next years draft. With him, the Lakers are a playoff team that nobody would want to face in a seven game series. Lebron has done what he normally does and has sat back a bit early on in the season to see what this team can be capable of. He’s the smartest player in the game and he knows that he can take over whenever he wants, but he also knows that he’s going to need this team behind him if he wants to continue his NBA Finals streak against all odds. If the Lakers make it to 50 wins and finish in the upper half of the Western Conference playoffs, it would be hard to not give Lebron an MVP with a third team and his fifth overall.

The case for Giannis is also easy. With Lebron out of the Eastern Conference, Giannis is on a path to dominate the Eastern Conference for years to come. He’s also the most jaw dropping player to watch game in and game out. Mike Budenholzer has allowed Giannis to run this team (which was something Joe Prunty wouldn’t allow for some reason) and Giannis has responded by guiding his team to the second best record in the NBA. Even as his team gets better around him, he is still very close to leading his team in the 5 major statistical categories (Points, rebounds, assists, steals, and blocks). He leads in points, rebounds, and steals by a nice margin and is second in assists and blocks by a slim margin. He’s the unquestioned leader of this team and if he continues his rise and the Bucks finish as the top seed in the East, I think he wins his first of what should be many MVP awards.

Trae Young has been somewhat of a surprise in his rookie year, which shouldn’t be the case considering what he did in college. He is averaging 15.6 PPG and 7.8 APG even with really bad shooting percentages. As he continues to mature and the Hawks put more talent around Young to allow him to shoot better, he could make a splash as one of the best players in this class. But, for now, nobody holds a candle to the two people that will actually be battling for this award.

This will be a battle to the end between Deandre Ayton and Luka Doncic, and both players will be great cornerstones for their respective teams regardless of which one wins the award. Deandre Ayton has been playing very well and is doing exactly what the Suns have expected from their #1 draft pick. He is averaging a double-double with 16.5 PPG and 10.3 RPG and seems like he will be a consistent cog in the future of the Phoenix Suns along with Devin Booker. I would like to see Ayton passing the ball a little better and getting his assists up. In their wins he is averaging 4.5 assists compared to only 2.4 in their losses, which I think is more than just a coincidence. Ayton has the ability to be a great passer out of the low block and has one of the league’s best shooters in Booker ready to be on the back end of those assists.

As for Doncic, this will be the second straight year that there is a “should he be considered a rookie?” argument, and just like last year the answer will not only be “yes”, but will be solidified with that player winning Rookie of the Year. Doncic has more claim to being a rookie than last year’s winner, Ben Simmons, did since it is his first year in the NBA (and he’s only 19), but he also has more high level experience than any other young first year player in NBA history as he’s played four years in the Euroleague winning a Euroleague championship as well as a Euroleague MVP. The Euroleague is clearly the second best league to the NBA and experience in the Euroleague dwarfs any experience gained in the NCAA. Despite these facts, Doncic is a rookie in the NBA and is also the most consistent player in this class. He is essentially the same player in wins as he is in losses. Doncic and Ayton will both have arguments in their favor for Rookie of the Year, but I am giving it to Doncic on the basis of team success if the Mavericks can remain around .500 or, better yet, be in the playoff conversation at the end of the season.